You probably haven’t considered taking a winding train ride through the Alaskan wilderness, but Alaska’s White Pass and Yukon Route Railroad offers a chance to see some of the area’s stunning scenery on the cheap. Perfect for wilderness lovers and history buffs alike, you’ll feel as if you stepped back 100 years as the historic train car winds its way through the mountainous terrain.

Moreover, the scenery you’ll pass through on the ride is otherwise untouched by public roads, meaning there’s no opportunity to drive through the area on your own, but the cost of the train ride is cheaper than a rental car.

The railroad is considered an International Historic Civil Engineering Landmark, and when you consider that construction was begun in the midst of the Alaskan Gold Rush, it’s truly a marvel of a bygone technological era. The ride starts in the coastal town of Skagway, Alaska, before climbing over 2,865 feet in elevation.

The entire ride is guided by well trained educators who share insight on the history of the region and the railroad, the ecologic systems of which the railroad is a part, as well as information on the culture of modern day Alaska and its economy. During the course of the ride, you’ll reach the White Pass Summit, as well as passing through two separate tunnels.

You’ll also pass over the ominously named White Horse Gulch and take in the aptly titled Bridal Veil Falls. The entire ride takes only three and a half hours, leaving plenty of time for further exploration in Skagway. 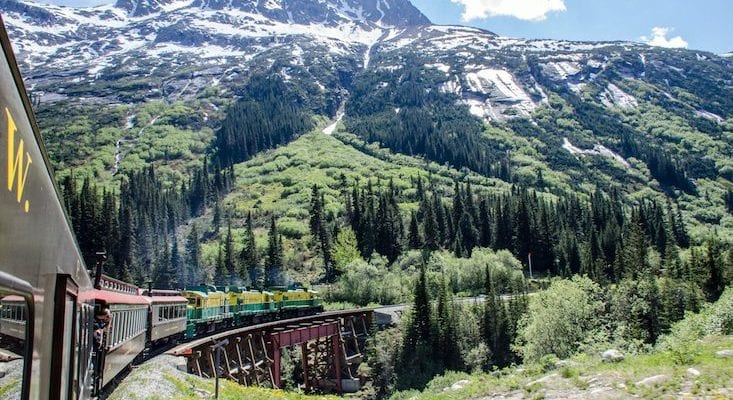 If that isn’t enough for you, you can extend your trip by crossing international borders on the Bennett Scenic Journey, which will provide you and your party with lunch as you wend your way over to Carcross, Canada. As it is an international option, your passport will be necessary, but you can choose to stay the night in Carcross before taking the return journey to Skagway. The benefit of the Bennett Scenic Journey? Having the opportunity to see the Bennett Station House, which can only be reached via the train or by foot.

At $122 and $229 respectively, both are relatively cheap options that will give you access to some of the most pristine views in the world. Just make sure to make the trek during the summer season, as the railroad closes at the end of September.

These Are Some Of The Most Stylish Motels In America

When the holidays roll by, it can be a bit of a challenge to figure out what to do with your time. ...

How People Can Face Their Fear of Backpacking and Hiking Alone

Not many people like the idea of going backpacking on their own. Some of them may have been on a ...

Top 3 Water Tablets for Your Next Outdoor Adventure

Water purification tablets are a lifesaver in emergency situations, like when you’re hiking in ...